Fur farms in several European countries are undergoing a phase-out period as precursor to the full implementation of the fur farming ban in their respective regions. During which, animals like minks, foxes, rabbits and chinchillas are being transferred to animal welfare organizations that will put them up for adoption. If you are planning to adopt one, it would be best to know beforehand the basic dos and don’ts related to the animal you intend to adopt.

Things to Keep in Mind When Adopting a Rescued Chinchilla 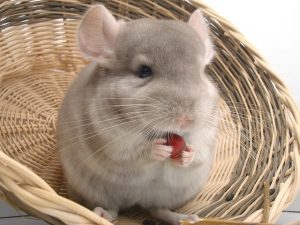 The chinchillas are the likeliest candidates for home adoption. Unlike minks, rabbits and foxes that can survive in the wilds, chinchillas possess certain traits and habits that require addressing in the best ways possible. In regions with perennial cold climate, it is important to know beforehand that draught (draft) poses as danger to chinchillas. On the other hand, warm conditions can trigger heatstroke. That is why it is best to place them in rooms with controlled temperature and away from direct sunlight.

It is also important to know that rescue centers in charge of transferring chinchillas to new owners, carefully screen individuals applying for chinchilla adoption. A rescue worker will ask questions pertaining to personal backgrounds, such as lifestyle, type of dwelling, work schedule and of one’s natural inclination to care for animals. Potential owners will then be asked questions aimed at gauging knowledge on chinchilla fostering. Aside from knowing which cage for small animals suits a chinchilla pet, basic knowledge of chinchilla habits and needs is likewise important.

Some may find the process too rigorous when compared to how dog or cat shelters simply require payment of a minimal fee. Keep in mind that the animals up for adoption were rescued from extremely harsh conditions, from whence they experienced stress, fear, and physical hardship. They were handled by workers who were more concerned in maintaining the quality of their pelt, to ensure their fur will command the most competitive price in the business.

Important Things to Know About Chinchillas

Nature and Habits – Chinchillas are gentle but energetic creatures that sleep during daytime and stay active at night. They are inclined to run around and jump, capable of leaping up to 6 feet high. Their teeth grow continuously, therefore constantly needing safe objects on which to chew. When experiencing stress, the creature manifests such condition by chewing on its furs. Care must be observed in handling or petting chinchillas since they have a very fragile rib cage.

Diet – Chinchillas are herbivores, best fed by way of timothy hay and premium chinchilla pellets made from balanced combination of lucerne/alfalfa, soybean, wheat, soya hulls, locust beans, plantain, parsley, linseed, salt, monocalcium and calcium carbonates. When fed with vegetables and/or fruits, they must be given in limited amounts. Their drinking water must always be fresh and free from chlorine. Feeding them with chocolates, caffeine, sugar, alcohol and treats with high-fat content can become causes of a serious health disorder.

Hygiene – Caring for chinchillas require providing them with dust bath with which they roll in as method of cleaning their fur. Dust bath purchased from stores contain substances similar to the organic dusts found in natural chinchilla habitats. Keep them away from areas where they can get wet, and if ever, dry their fur thoroughly to avoid molds from setting in. Cages or areas in which a chinchilla pet nestles must be cleaned and disinfected regulary at least once a week. Make certain to put the chinchilla back only when the cage or area is completely dry.